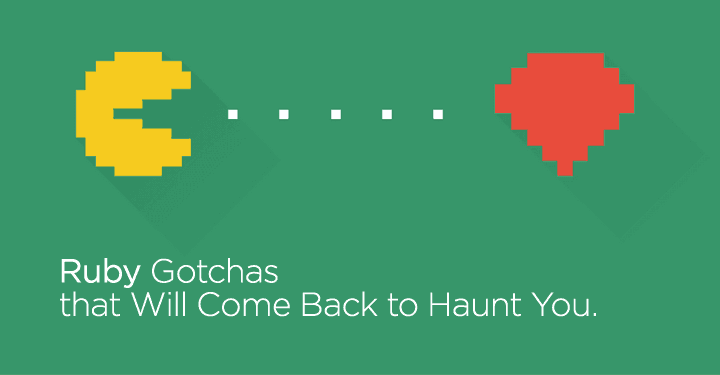 Sooner or later, we all run into so-called Ruby Gotchas — those small language details that hide from our sight for hours of hardcore debugging. Here is a list of popular Ruby Gotchas and curiosities that developers should be aware of.

Most Ruby on Rails beginners get excited by the framework and start crafting applications without any knowledge of the language. And that’s the magic of RoR.

At some point things start to get serious. Some take time and effort to explore dirty secrets of Ruby on Rails, while others gloss over and become senior developers with almost zero knowledge of the language.

Anyway, sooner or later, beginners or experienced programmers, we all run into so-called Ruby Gotchas — those small language subtleties that hide from our sight for hours of hardcore debugging (puts '1').

Here is a list of popular Ruby gotchas and curiosities that developers should be aware of. For each case, there’s an example of confusing and/or error-prone code.

They come together with good practices, that will prevent you from making simple (but difficult to find) mistakes and simplify your (and your code maintainer’s) life.

Likewise: or is NOT the same as ||

The first example becomes clearer when we add parentheses that illustrate how using and differs from &&:

Some say: use and / or for flow control and && / || for boolean operations. I will say: don’t use keyword versions (and / or / not) at all (and go with more verbose ifs and unlesses). Less ambiguity, less confusion, less bugs.

More: Difference between “or” and || in Ruby?

==, ===, eql? and equal? are all different operators, meant for different usage in different situations. You should always use == operator for comparing things, unless you have some specific needs (like you really need to differ 1.0 from 1) or manually override one of the equality operators for whatever reason.

Yes, the eql? version may look smarter than plain old == comparison, but does it really do what you meant it to do, like, just compare some things?

This is one of the places where omitting the parentheses is not only a matter of taste (or conventions), but actually changes the program logic.

Your exception must not be an Exception

Beware: this code will not catch BangBang and the message 'Caught it!' will not be displayed!

The result will be our BangBang exception raised and displayed:

More: Why is it bad style to rescue Exception => e in Ruby?

“class Foo::Bar” is NOT the same as “module Foo; class Bar”

See how MY_SCOPE value differs because of how we defined module/class:

Most “bang!” methods return nil when they do nothing

Never depend on built-in bang! methods return value, e.g. in conditional statements or in control flow:

Above code can cause some unpredictable behaviour (or, to be more specific, very predictable failure when @name is already in uppercase). Also, it is another example why you should not use and / or for control-flow shortcuts. No trees will be cut if you add those two enters there:

(Note that the assignment method bar= returns 3 even though we explicitly return 'OK' at the end of its body.)

Never rely on anything that happens inside assignment method, eg. in conditional statements like this:

This will obviously not work.


“private” will NOT make your “self.method” private

(Note that if the method were private, Foo.bar would raise NoMethodError.)

In order to make your class method private, you have to use private_class_method :method_name or put your private class method inside class << self block:

I ain’t afraid of no Ruby Gotchas

Ruby gotchas listed above may not look like major mistakes, and at first sight they may seem like a matter of aesthetics or conventions.

Trust me — if you don’t deal with them, they’ll give you headaches. The headaches will lead to a heartbreak. And if you fall out of love with Ruby, you’ll stay alone. Forever.