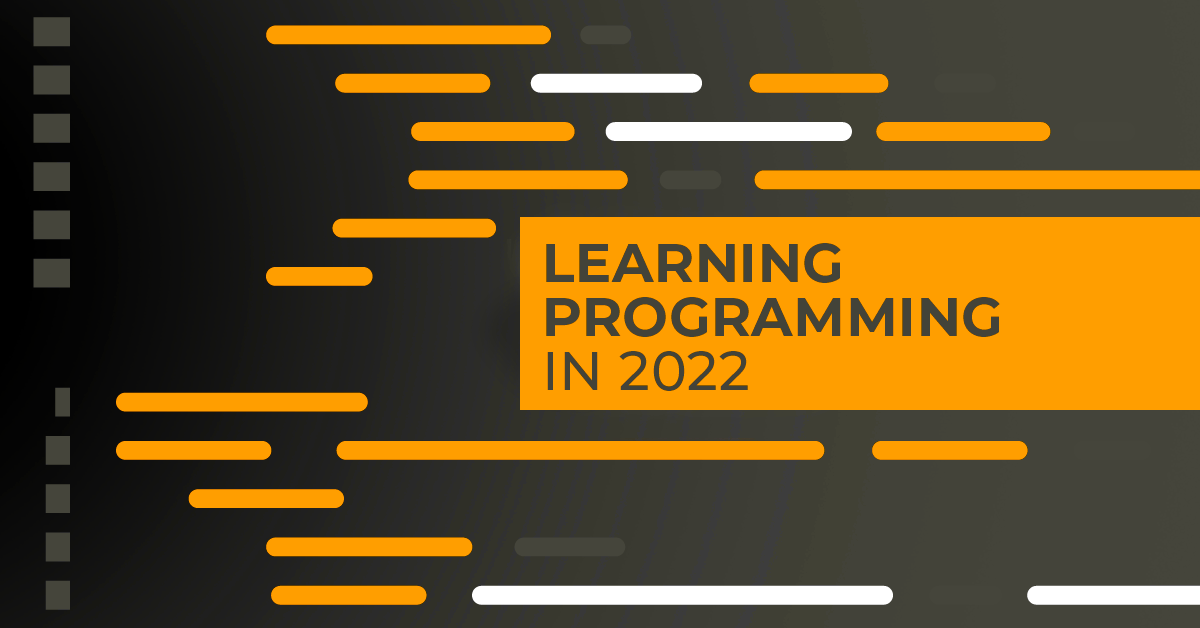 Programming is one of the most in-demand skills these days. It is the developers who create the technology and shape its future. Then it is not surprising that a lot of people have set learning to programme as their new goal for 2022. However, along with the desire comes a number of questions and concerns. Which language to start with? Which method of learning will be the more effective? How much time does it take to learn to become a junior? In this article, you will learn where you have to begin to learn programming from scratch smoothly and quickly.

Before we get into the details of taking this path of development, it should be made clear that programming is nothing more than looking for an abstract solution to a very specific problem. To do this, developers need to have a good understanding of the problem at hand so they can break it down into smaller problems that can be solved with a few lines of code. So the programmer spends most of his time thinking and planning. Writing down the code is the final but very satisfying step in his work!

Why is it worth to learn to programme?

Progressive digitalization and the demand for specialized professionals mean that the IT market is considered the most promising for employees. The strength of major companies and startups is programming. The ability to code allows us to enter a new world of technology where we have the ability to do great things for ourselves and others: creating software, websites, or apps. Working as a software developer provides a promising future and stability with the ability to work online from everywhere. The programming career opens up a wide range of career opportunities for you.

How long does it take to learn programming from scratch?

It is difficult to say explicitly how much time it takes to learn to programme. However, this is not a task for a day or a week. It requires at least a few months, and if we are talking about advanced level programming, a few years of studying. The amount of time it takes to learn a particular programming language depends on how you will be learning, whether it will be your main activity or whether you will be combining it with your job at the same time.

If you are starting from scratch, it will take you about 300-400 hours to learn the basics of programming. By devoting six hours a day, you will master it in two months. Devoting just one hour a day for studying, on the other hand, will result in learning the same material in about a year. In either case, you must be prepared for an intense learning process that requires persistence, mental effort, and patience.

It is also important to note that learning to programme has the same educational assumptions as learning languages. In the beginning, it is essential to understand the basic commands so that you will be able to write down simple actions to be performed by the computer. The next step is to learn the rules and principles of code writing, and then gain the ability to read and understand code written by other programmers. Mastering these learning steps will allow you to move on to practice and at the same time to write and build pages, or apps, on your own.

Which programming language to choose?

There are hundreds of programming languages and options, as well as directions to use coding skills (web programming, web apps, mobile apps, etc.). When starting a programming adventure, only you can answer the question of what language is best to learn. Make your choice based on your interests and the type of software you want to master. Consider what you expect to accomplish with programming, what you’re going to do with your new skills, and whether learning to code is really something you want to take on.

If you’re going to try to get a job as a front-end developer, you should start by learning JavaScript or CSS. This is a good choice for people who posses an aesthetic sense, would like to see the results of their coding right away, and are not afraid of working with designers and clients. It is the most popular programming language, plus it is considered to be the easiest to start with.

Python will be a good choice for people who want to focus on data analysis or plan their career path with back-end. In these cases, scrupulousness and the ability to think logically and draw conclusions are valuable traits, as the job will involve creating algorithms and logic challenges.

People who want to work on corporate systems should take a closer look at the Java language. Being familiar with this language allows you to work on advanced software projects, where patience and perseverance as well as self-reliance in carrying out complex activities are valuable. Operating this language often involves working on a snippet of a large application and involves coding in large teams.

If you plan to make your future in computer game development, then knowledge of C++ or C# will definitely be essential. Java and Swift, on the other hand, are most commonly used for mobile app development. These are career paths less often chosen by newcomers, but they are evidence that there are many opportunities to apply programming knowledge.

It's also worth remembering that if, in the process of learning, you discover that a particular language isn't for you, it's not a lost cause. Even a basic knowledge of one programming language will help you build a knowledge base that will make learning the next one much easier.

Which method of learning should I choose?

Learning and mastering programming on your own is entirely possible, but it requires logical and mathematical skills and a great determination over a long period of time. Some websites have some free or paid good quality content for learning to code. Also, it's not difficult on the web to come across programming blogs, specialized forums, or videos that provide a great knowledge base. However, when deciding to learn on your own, you should be aware that at some point you may overlook important aspects that prevent you from continuing to learn effectively. One of the main problems faced by the independent learners is the presence of small gaps in knowledge, which are initially ignored and later on build up making it difficult to understand particular topics.

Learning at the university involves acquiring a broad and general knowledge of computer science. The classes focus more on theory than on a practical aspect of skill acquisition. Studying requires a full-time commitment for several years, so it's an option that won't be preferred by people who want a more casual approach to programming or who want to retrain quickly. Graduation will provide a college degree and extensive career opportunities in the IT industry. However, it is important to remember that a person who does not create projects on his or her own outside of class and does not orient himself or herself toward growth in a particular field may have trouble finding a job. Their knowledge may be too general and knowledge of programming languages not practical enough to follow a career path as a programmer.

One of the most effective ways to enter the world of technology and programming, and to accelerate your career is to learn programming in school. In just 10-20 weeks, you have the chance to become a programmer and have exposure to the most sought-after job market by companies. By taking part in a programming bootcamp, you gain access to up-to-date knowledge passed on by experienced lecturers who have been working in the profession for years. From the very beginning of the programming course, they teach what the programming profession looks like in practice, which is very important for future work as a junior. The programming bootcamp also gives you the freedom to choose between in-person learning, which will allow direct contact with other students, and remote learning, which gives you the opportunity to learn from anywhere. You just need the Internet connection. In case of any Coders Lab programming course the same material is covered regardless of the chosen mode - stationary/online.

The best way to learn programming from scratch is to combine a good training system, with a very experienced teacher, and lots of exercises. However, no matter which way you choose to learn, you need to remember that programming is a skill that requires constant updating of knowledge.

Like foreign language skills, programming is an increasingly desirable skill for employers. It's something that, to a greater or lesser extent, we come into contact with on a daily basis and that will become increasingly important in the near future. One thing is also quite sure. Programming gives you new challenges every day, does not let you get bored, and every time you solve a problem it is an additional training of your mental performance. Who knows, you might just discover a passion in programming that will change your life!