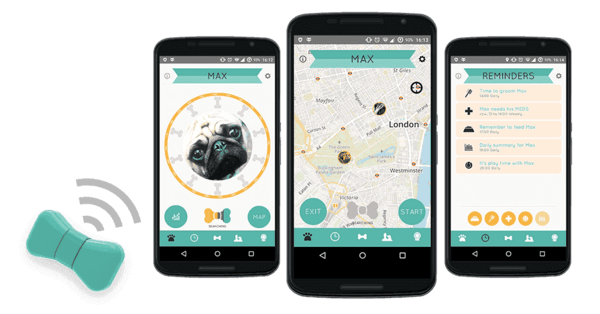 Millions of dog lovers go with their best pet friends to walk every day. Wondermento decided to create the Wonderwoof BowTie which allows its users to monitor their pupils' activity. The company has asked RST-IT to develop a native Android app integrated with their wearable, so using it would be as easy and rewarding as possible.

Wondermento’s Wonderwoof app makes it really easy for its users to monitor their dogs' daily activities thanks to a lot of useful options such as reminders, daily summaries and reports. While working on this project we had to use a lot of advanced mobile development technologies, to make the project’s objectives possible.

Working alongside Wondermento, RST-IT strategists, UX designers and mobile dev team managed to create a native Android app, integrated with Wonderwoof Bow Tie. Users can download the mobile app from Google Play and connect it with their wearable to fully use its abilities.

Their ability to adapt and work with a tricky and agile, ever changing project showed that they were more than capable. The strongest part of RST IT's contribution was their ability to manage locally very well.
- Joe Morsman, Wonderwoof CTO

In this project RST-IT dev team had to use a lot of technologies, such as:

Roboguice - Dependency injection library for Android that helps to avoid boilerplate code and speeds up the implementation.

Retrofit - Type-safe HTTP client for Android and Java by Square, Inc. It simplifies consuming external APIs and speeds up the process of integrating them within the app by providing an easy to understand interface.

Picasso - Picasso is used to load images. Has an out of the box memory and disk cache that is configurable. It provides a transformation interface with some basic transformations implemented and integrates easily with Android specific classes.

Mapbox - A map SDK that allows customizing the map layout. It was required by the client to unify the look & feel of the maps with the design of the app. When we started using it, Map was still in beta and now it is fully developed.

Espresso - Used for UI testing on Android. Has an awesome, very flexible interface.

Zendesk - Required by the client to allow better communication with the users. It’s basically a ticket system that can be integrated on different platforms. Allows sending additional data with the tickets.

The Android app developed by RST-IT software house is a great way for people to stay connected to their dog through tracking its health and social activities. We also implemented features like tracking (with exercise progress and goals), reminders, social media integration and GPS. Wonderwoof synchronizes with dog’s race, weight and age.